Glenn Beck Slices a Watermelon to Make a Point

Found this one over at Media Matters. Just months after a cartoon linked the stimulus bill with a monkey, Glenn Beck is now linking the climate change (cap and trade) bill with a watermelon. Unlike the cartoon, which some people claimed was never connected directly to Obama, Beck's use of the watermelon coincides with his guest's statement that the bill was being pushed by Obama. Maybe i'm just crazy, but you can watch and judge for yourself...

Supreme Court maintains the Voting Rights Act… but with one dissent

As explained in a statement released by the NAACP Legal Defense and Education Fund,

“The Court's ruling today ensures that minority voters will continue to have the safeguards provided by the Section 5 preclearance process. The Court expanded the number of places that can seek to "bailout" or exempt themselves from preclearance. However, no Section 5-covered jurisdiction can do so without demonstrating a clean bill of health for a ten-year period.”

Although some observers predicted that the case might be decided on a 5 to 4 vote, as is often the situation on civil rights matters, the vote in this case was a surprising 8 to 1.

So, who, you may ask, was the lone dissenter? Who was the voice in the wilderness declaring that this voting rights stuff is overrated? Click here for the full article...

Stone Mountain: What confederate lovers can learn from the Germans

To those of you who have ever had the urge to turn a relaxing night out with the family into a political rally (yes, all three or four of you), well, this article’s just for you.

This past weekend, while driving home from a fairly long and hot day of little league baseball, my wife and I got a call from a friend. She was letting us know about a family friendly “soulfest” being sponsored by one of the local radio stations. The only catch was that the event was taking place at Stone Mountain Park... Click here for full article.


Posted using ShareThis
Posted by Cliff Albright at 1:31 AM No comments:

In a decision released on Monday, the U.S. Department of Justice directed the Georgia Secretary of State to discontinue a system being used to verify the citizenship of Georgia voters. In it’s letter to Georgia Secretary of State Karen Handel, the Justice Department stated that the verification system “does not produce accurate and reliable information and that thousands of citizens who are in fact eligible to vote under Georgia law have been flagged.” The department also found that those citizens flagged as non-citizens were overwhelmingly Black, Asian or Hispanic. Click to read full article...

Posted using ShareThis
Posted by Cliff Albright at 11:06 AM No comments: 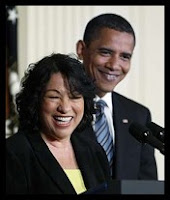 By now, anyone reading this has likely already heard about the controversy surrounding remarks by Supreme Court nominee Judge Sonia Sotomayor--remarks that nuts like Limbaugh and Gingrich are calling racist and/or reverse racist. While i'm sure that none of my Cliff Note readers would fall for the oakie doke, and most of us know that this manufactured controversy is about remarks taken out of context, it's likely that most of us haven't seen an expanded version of the remarks. So for those of you who need more ammunition for those potential conversations with white co-workers, i've included an extended excerpt below. Keep in mind that these remarks were specifically on the topic of judicial diversity as it relates to discrimination cases, and not just blanket remarks about judges in general.

"Whether born from experience or inherent physiological or cultural differences, a possibility I abhor less or discount less than my colleague Judge Cedarbaum, our gender and national origins may and will make a difference in our judging. Justice O'Connor has often been cited as saying that a wise old man and wise old woman will reach the same conclusion in deciding cases. I am not so sure Justice O'Connor is the author of that line since Professor Resnik attributes that line to Supreme Court Justice Coyle. I am also not so sure that I agree with the statement. First, as Professor Martha Minnow has noted, there can never be a universal definition of wise. Second, I would hope that a wise Latina woman with the richness of her experiences would more often than not reach a better conclusion than a white male who hasn't lived that life.

Let us not forget that wise men like Oliver Wendell Holmes and Justice Cardozo voted on cases which upheld both sex and race discrimination in our society. Until 1972, no Supreme Court case ever upheld the claim of a woman in a gender discrimination case. I, like Professor Carter, believe that we should not be so myopic as to believe that others of different experiences or backgrounds are incapable of understanding the values and needs of people from a different group. Many are so capable. As Judge Cedarbaum pointed out to me, nine white men on the Supreme Court in the past have done so on many occasions and on many issues including Brown.

However, to understand takes time and effort, something that not all people are willing to give. For others, their experiences limit their ability to understand the experiences of others. Other simply do not care. Hence, one must accept the proposition that a difference there will be by the presence of women and people of color on the bench. Personal experiences affect the facts that judges choose to see. My hope is that I will take the good from my experiences and extrapolate them further into areas with which I am unfamiliar. I simply do not know exactly what that difference will be in my judging. But I accept there will be some based on my gender and my Latina heritage."

My concern with this situation is the fact that in emphasizing how "fair" Judge Sotomayor has been on racial issues, the Obama adminstration is floating the stat that in cases dealing with racial discrimination, Judge Sotomayor has sided in favor of the alleged discriminators 80% of the time. While that info may help in getting her confirmed, it sure doesn't do anything to make me more confident that she'll be a strong advocate for racial justice. While i respect my fellow Bronx native and surely hope she gets confirmed, i would have preferred to see a Latina version of Thurgood Marshall or Constance Baker Motley.

But at the end of the day, this process should remind us of the limitations on a Black President. President Obama simply cannot and will not be the kind of president demonstrated by Richard Pryor. And while we may conclude that such a presidency is not necessary, we nevertheless have to decide what IS necessary. What is our agenda, and is it possible with Obama as president, or with anyone else as president for that matter?