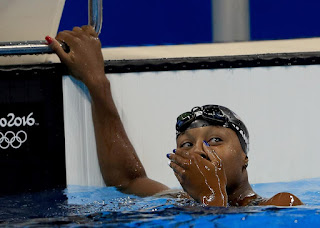 When I was young, I used to love watching the Olympics. I remember watching, at the age of 10, the 1980 Lake Placid Olympics and following every game of the U.S. hockey team’s journey to gold, and I can still hear Al Michaels’ “do you believe in miracles” as if it were yesterday. I remember watching the 1984 Summer Olympics, cheering for Carl Lewis and Mary Lou Retton as if they were personal friends of mine.

I can even remember how excited I was when I found out that handball was an Olympic sport, only to find out that the Olympic version was far different than the handball I was exceptionally good at playing on handball courts in the Bronx. So I wasn’t likely to have my own moment on the podium, but I could still feel a sense of pride and joy watching U.S. athletes receive gold as the flag was raised and The Star Spangled Banner was played.

As I became older and more politically conscious (now known as “woke”), the Olympics became more problematic. To be sure, I still loved the athleticism and the incredibly human stories behind every athlete in every event. But the questions of who I was cheering for, and why, were far less clear than in my youth. And the U.S.-centric television coverage, only occasionally muted by a fascination with European athletes, became outright irritating.

Watching the Olympics became another manifestation of W.E.B. DuBois' “double consciousness”. If you’re not familiar with the concept, this quote from his classic The Souls of Black Folks should make it plain: “One ever feels his two-ness— an American, a Negro; two souls, two thoughts, two unreconciled strivings; two warring ideals in one dark body, whose dogged strength alone keeps it from being torn asunder.”

Nevertheless, like most Black folks, I have always reserved special hopes and prayers for athletes of color in events where we don’t usually participate. Whether Debi Thomas in 1988, Dominique Dawes in 1996, or the Jamaican bobsled team for that matter, I feel a personal connection to every Black athlete trying to become “the first”. When Debi fell in ’88, my heart sunk, and when Gabby nailed her landings in 2012, my heart raced!

Which brings us to yesterday—a day on which we saw the expected coronation of Simone Biles in the gymnastics all-around competition. However, what was far less expected was the performance of “the other Simone”, swimmer Simone Manuel. I say, “far less expected”, but perhaps it should have been expected, considering she had the second fastest time in the semi-finals. AtlantaBlackStar.com has written about how her performance in the semis received almost no attention from the NBC commentators. And as Slate.com points out, NBC’s pattern of ignoring Simone continued in the finals.


The commentators then spent 80% of the race obsessed with the two Australian sisters in the race—neither of whom ended up with a medal. In fairness, NBC did a decent job of capturing the aftermath of the race, capturing Simone’s classic reaction upon seeing her winning time on the board, and an emotional moment with her coach and teammates after leaving the water. But the network then embarrassed itself and infuriated viewers by NOT showing Simone’s medal ceremony live, and instead broadcasting videotaped footage of Russian gymnasts.

So by the time I finally got to watch her ceremony at around midnight, I was already feeling some type of way. And as I watched a tearful Simone during the playing of the national anthem, I couldn’t help to think about (and not for the first time during these Olympics), Langston’s Hughes’ poem, “Let America Be America Again”. I hesitate to excerpt a few verses here, because the entire poem is a must-read, but nevertheless, here are the first few verses:

(America never was America to me.)

Let America be the dream the dreamers dreamed—
Let it be that great strong land of love
Where never kings connive nor tyrants scheme
That any man be crushed by one above.

(It never was America to me.)

O, let my land be a land where Liberty
Is crowned with no false patriotic wreath,
But opportunity is real, and life is free,
Equality is in the air we breathe.

(There’s never been equality for me,
Nor freedom in this “homeland of the free.”)

As powerful as the opening verses are, it was only after re-reading the entire poem, that I realized why this poem has been on my mind. In truth, it’s been on my mind not only since the Olympics started, but ever since the Democratic convention. After four days of praise for American Exceptionalism, the final verses from Langston’s poem have been somewhere in my subconscious. They read:


O, let America be America again—
The land that never has been yet—
And yet must be—the land where every man is free.
The land that’s mine—the poor man’s, Indian’s, Negro’s, ME—
Who made America,
Whose sweat and blood, whose faith and pain,
Whose hand at the foundry, whose plow in the rain,
Must bring back our mighty dream again.

Sure, call me any ugly name you choose—
The steel of freedom does not stain.
From those who live like leeches on the people’s lives,
We must take back our land again,
America!

O, yes,
I say it plain,
America never was America to me,
And yet I swear this oath—
America will be!

Out of the rack and ruin of our gangster death,
The rape and rot of graft, and stealth, and lies,
We, the people, must redeem
The land, the mines, the plants, the rivers.
The mountains and the endless plain—
All, all the stretch of these great green states—
And make America again!

As so, I’ve come to this conclusion: Donald Trump is right.

We must make America great again.

Not by returning America to some mythical time period, but by demanding that it actually be what it has always claimed to be.

At times, I’m not sure that’s ever going to be possible.

But then I experience some #BlackGirlMagic… and I believe.
Posted by Cliff Albright at 3:53 PM No comments: