The Truth About Dr. King and Economic Empowerment

“For we know now that it isn’t enough to integrate lunch counters. What does it profit a man to be able to eat at an integrated lunch counter if he doesn’t have enough money to buy a hamburger?” Dr. Martin Luther King, Jr.

Dr. Martin Luther King Jr. is recognized throughout the world as a civil rights champion.  However, many of us underestimate Dr. King’s increasing focus on economic rights — and more important, economic empowerment — during his final years. A closer look at Dr. King’s final five years demonstrates the point.

For example, the 1963 Birmingham Campaign, which many people remember because of the Children’s Crusade and the police force’s use of water hoses and dogs, was not only about desegregating public facilities. The campaign also was about creating equal employment opportunities for Black residents in the downtown stores, which didn’t mind taking Black money but refused to help create Black income...

Click here to read the full article at AtlantaBlackStar.com.
Posted by Cliff Albright at 4:29 PM No comments:

They say the apple doesn’t fall far from the tree; meaning of course that an individual’s characteristics are often similar to those of his/her parents.

It’s a statement I’ve never been particularly fond of, partially because sayings and religious stories featuring apples and trees are usually problematic.  In regards to this specific saying, I’ve always felt that it’s accuracy was shaky, at best.  In truth, sometimes the apple falls so far from the tree that it’s not even in the same area code as the tree.  Case in point: meet Albert Turner, Jr.

Albert Turner, Jr. is the son of Albert Turner, Sr. and Evelyn Turner, two of the Alabama civil rights activists who were targeted and prosecuted by then-U.S. Attorney Jeff Sessions for alleged voter fraud.   The Turners along with fellow activist Spencer Hogue became known as the Marion Three, named after the county seat of Perry County which sits in Alabama’s Black Belt region. 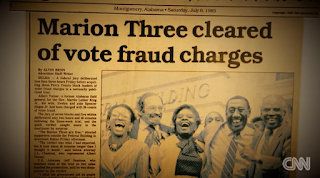 Many years earlier in 1965, it was Marion, Alabama where young Jimmy Lee Jackson was murdered, leading to calls for a march which eventually became Bloody Sunday and the Selma to Montgomery March.  When the marchers confronted state troopers on Bloody Sunday, Albert Turner, Sr. was in the second row, right behind Rev. Hosea Williams and John Lewis.

During my nine years living in Selma, I was blessed to work and organize with veterans of the Voting Rights Movement, including legendary civil rights attorney J.L. Chestnut, who represented the Turners in 1985.  J.L. was crystal clear about Sessions’ overzealous, and in his words “racist”, prosecution of the case.  A photo of J.L. alongside the Turners is featured in a recent CNN story about the case—the same story in which Mrs. Turner explains why she has not yet forgiven, and will NEVER forget, what Sessions did.

While Mrs. Turner is convinced that Sessions has not changed his racist ways, her son, Albert, Jr., has become a Sessions supporter.  He claims that Sessions was not the driving force behind the voting fraud case and that he [Turner] has “not seen racist tendencies or biases from Sen. Sessions."

To some, Turner’s remarks are a bit confusing, as he presumes to know more about the case than his own mother who was directly involved.  Nevertheless, confusing as the remarks may be, few who are familiar with Albert Turner, Jr.’s politics will say that they are incredibly surprised by Turner’s remarks.  Turner has a reputation for pursuing whatever is in his own personal interest, regardless of any collateral damage.  In some cases, this has involved questionable political alliances, often with individuals whose interests and policies have been in stark opposition to the interests of Perry County’s predominantly Black and low-income community members.

Perhaps the most glaring and most destructive example of Turner elevating himself while taking actions that hurt his community is the example of a coal ash landfill which Turner and the rest of the county commission agreed to place in Perry County.  The landfill is meant to hold 4 million tons of toxic coal ash resulting from the TVA Fossil Plant spill in Tennessee.  As the landfill was being considered, community members raised a series of concerns.  According to Facing South, an online magazine which has done a series of wonderful reporting on the issue:

Nevertheless, Turner and the county commission decided to move forward with the landfill, arguing that it would provide millions of dollars in revenues.  In the process, many community members felt that resident feedback was being minimized, and some felt that conflicting community events were scheduled at the same time that an environmental impact meeting was being held.  The following documentary movie trailer provides some background on the decision-making process, or lack thereof.

It’s worth noting that since the landfill has been in operation, residents have complained of health concerns including respiratory problems, headaches, dizziness, nausea and vomiting.  As of 2016, a county health database sponsored by the Robert Wood Johnson Foundation ranks Perry County as 64th out of 67 Alabama counties in regards to overall health (down from 63rd in 2011).

In a similar situation, in 2004, Turner and the Perry CountyCommission approved of a private prison facility in the county.  As is often the case with prison of any sort, there was community resistance to the idea, based on safety concerns.  Nevertheless, Turner and the commission justified the decision largely based on the potential economic impact.  Although it was estimated that the facility would cost $20 million to build, it’s unclear how much, if any, of that funding was recycled within Perry County with local businesses.  What’s more clear is that the economic boost that was promised never materialized, at least not for most of the residents of Perry County.  Any boost that took place seems to have been limited to the county commission and its commissioners.

Thus, when Albert Turner, Jr. speaks admirably of Jess Sessions, one thing should be clear: he is speaking only for himself.  He certainly isn’t speaking for his mother; nor is he speaking for the majority of Perry County or the majority of Alabama civil rights activists (See statements from another elected official and other organizations).  Just himself.  And he is speaking for himself not only in the sense that he is expressing his own viewpoint, but in the sense that he speaking out of personal self-interest.  One cannot say for sure if there was a specific quid-pro-quo associated with his remarks in support of Sessions, but if there wasn’t, it certainly wouldn’t be consistent with the character of his political career.

And in that sense, the apple has truly fallen far, far away from the tree.  For both Albert Turner, Sr. and Evelyn Turner represent a generation of political leadership for which community service and the interest of the community was priority number one.  When Albert Turner, Sr. was first elected to the commission seat his son now holds, you did not have to wonder if his votes and actions would be aligned with the people’s agenda; he had a legacy of service that spoke for itself.  It’s a charactestic we need more of today.

But I would be remiss if I pretended that this shortcoming solely belongs to Albert Turner, Jr., just as it would be inaccurate to suggest that he has been the only Black leader to speak out in support of Sessions.  There have been Black pastors, other Black elected officials, and even Condoleeza Rice, who’s qualifications to speak out on matters related to civil rights are primarily related to her connection to the four little girls tragically murdered in the Birmingham bombing at 16th Street Baptist Church.

No, the disconnect between our current style of elected leadership and proven track records of faithfully serving our communities beyond personal self-interest extends far beyond Albert Turner, Jr.  It is a disconnect which in many ways has widened at the same rate as our deepening involvement in America’s two party system.  The more involved we’ve gotten in traditional party politics, the more we have taken on the culture of those politics.  And the more negative aspects of that culture—the overemphasis on individualism, corporate support, pedigree, hierarchy and more—have been extremely detrimental to our collective civic engagement.

Although our affiliation with party politics in recent decades has obviously been closely aligned with the Democratic Party, this is by no means a critique of one party in favor of the other.  Instead, it is a recognition that transforming our political leadership will require distinct and independent political structures, with a distinct political culture and, perhaps most importantly, with independent financing.

Failing to pursue such options almost guarantees that we will continue to build alliances with people who do not fully support our interests, or even worse, with the likes of Jeff Sessions and others who are fundamentally opposed to our interests.  It’s past time for us to demand better.

Posted by Cliff Albright at 1:42 PM No comments: