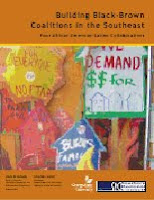 As the first decade of the 21st century comes to a close, I am constantly reminded of WEB DuBois’ prophetic declaration at the beginning of the 20th century: that the major issue of the century would be the problem of the color line. While some folks may debate whether or not that will be true for the current century, what is NOT debatable is that overcoming the problem of the color line is going to require coalitions among all of those affected by it, particularly between Black and Latino communities.

With this in mind, the Southern Regional Council (SRC), one of the country's oldest civil rights organizations, recently released a report that examnies Black and Latino coalitions. The report features case studies from four successful coalitions in the South, and it includes lessons learned that could be useful for other organizations seeking to build such coalitions. The video below summarizes some of the report's key findings.

The above video, other videos and much more information about the SRC can be found at their blog, www.southernchanges.blogspot.com. The SRC is seeking to disseminate the report widely. If you work with an organization that would like to receive hard copies of the report and/or pull together a group of organizations that would like to participate in a workshop, please contact the Southern Regional Council at info@southerncouncil.org or charles.johnson@hklaw.com.