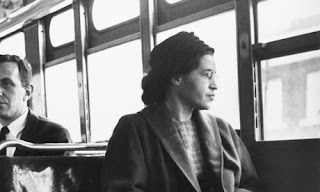 On this day in 1955, Rosa Parks was arrested for refusing to give up her seat on a segregated bus.  Today, 61 years later, there are several relevant lessons we can pull from that event and the movement that followed.  The following is not an exhaustive list, but includes five lessons that are currently on my mind.

1.   Rosa Parks wasn’t just a random person who was tired on the bus.  She was an officer in the local NAACP.

Today’s Relevance: Organizations matter.  If you’re not in one, join one.  And if social media is the limit of your organizing, that’s not enough—helpful, but not enough.  Kwame Toure (formerly Stokely Carmichael) spent his entire life speaking about the need to “organize, organize, organize,” and he emphasized the difference between mobilizing for short-term action and, organizing for sustained change.  We need to strengthen our organizations.

2.   It does us no good to try to Whitesplain away the bus driver who called the police by exploring his economic anxiety over possibly losing his job.  He was racist and his actions were in support of a racist policy and belief system.  Period.

Today’s Relevance: figure it out on your own.  I’m tired of even talking about it.

Actually, I think I will elaborate a little.  There are no words for how tired I am of the media, Democratic politicians, or so called allies talking about how the White working class has been ignored and how they just want to be heard.  First, such an apologist approach fails to deal with the fact that college educated, upper income White voters also supported Trump, but let’s just ignore that inconvenient truth for a minute and address the “White working class wants to be heard” narrative.

It makes little difference to me whether they voted for Trump because they agree with his racism, or whether they disagree but didn’t find it important enough to vote against him.  Either way, you are not my ally.  To me, you are the same as the bus driver who tried to kick Rosa Parks out of her seat.

3.       The male leadership in Montgomery rejected the boycott idea, but Jo Ann Robinson refused to let that stand in her way.  She and three supporters (including two students) distributed more than 50,000 copies of the boycott flyer… overnight… with no high-powered copy machines.

Today’s Relevance: A couple of points here—one dealing with sexism within our movements, which we must continue to be conscious and intentional about addressing today.  Secondly… Brothers, we've got to step the ____ up!  Although Black voters were pretty unified in our voting preference, there was a gap between Black women and Black men (no, NOT the deciding factor in results).  But it’s not just voting, it’s community meetings, school meetings, etc.  Please don’t get me wrong—I’m not riding the “all Black men are trifling” train, and I fully understand our unique challenges.  But it’s 2016, and sisters are still making 50,000 copies with not quite enough help.

Today’s Relevance: Too often, we fail to start action—or we criticize the actions that others have started—because we’re not absolutely certain of where it will end or what impact it will have.  Sometimes we just need to move.  That’s not to say that we need to just be reckless, and the people of Montgomery certainly weren’t reckless in launching a one day boycott.  But it is to say that we need to stop letting the perfect be the enemy of the good, and more importantly, stop letting fear rationalize our inaction.

Newton’s laws of motion (probably stolen from a Black grandma) state that a body at rest stays at rest until acted on by an outside force.  So, if the recent election has left you uncertain, afraid, paralyzed, etc. and you’re not yet moving, let this serve as your outside force.  MOVE!

5.       Technically speaking, bus segregation did not end because of the boycott.  The segregation actually ended because of a concurrent legal case, Browder vs. Gayle, which eventually made its way to the Supreme Court.  The Supreme Court declared the segregation laws unconstitutional, and only then did the community end the boycott. Today’s Relevance: We must remember that we have always used civil disobedience and legal strategies (as well as self-reliance strategies that try to bypass legal barriers).  These tactics and strategies are not polar opposites, and when effectively used to complement one another, we can and will make change.


A final note: Some feel that there’s little to be learned from previous movements—that tactics from 60, 30 or even 10 years ago are outdated.  But I argue that many of the keys to our future success are rooted in our previous victories (and defeats).

Posted by Cliff Albright at 5:36 PM